How to rename named objects in AutoCAD

How to rename named objects in AutoCAD

Using RENAME command you can rename named objects in AutoCAD like block, layer, and linetypes. This command can be used to rename individual objects as well as multiple objects, let’s see how it can be done for individual objects first.

Type REN on the command line and press enter, Rename window with the list of all named objects will pop up which looks like this. 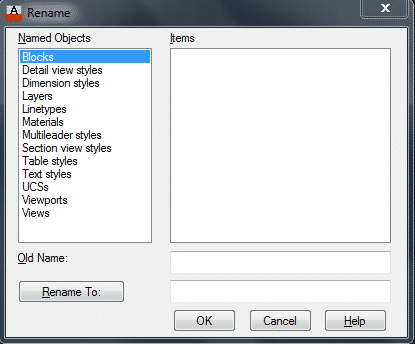 You will see current name of the block in Old Name field present below items panel, type in a new name in Rename To field and click on Rename To button. Your block will be renamed to the new name, once you are done renaming objects click on OK button to save the changes and close the rename window.

The rename command is not limited to renaming named objects individually, you can even rename multiple objects with rename command using wildcard characters.

For explaining this, I will assume that we have a drawing with six layers as shown below, and we need to rename all layers starting with ABC to XYZ.

Type REN and press enter to start rename command then select layers from Named Objects panel. Now type ABC* in the Old Name field of Rename window, you will notice that all layers with first three characters as ABC will be highlighted in Items panel. Type XYZ* in the Rename To field of the window.

This syntax will rename all layers with first three characters from ABC to XYZ keeping remaining characters in the name unchanged. Click on Rename To button to apply changes and all selected layers will be renamed to XYZ prefix. 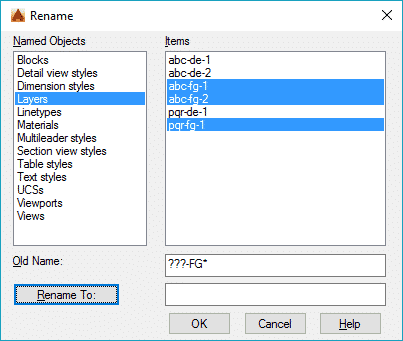 You can also rename characters from the middle of the layer name.

For example, if we want to change the name of Layers with 5th and 6th characters from FG to LM then we need to type ???-FG* in the old name field and ???-LM* in Rename To field.

In a similar way, you can also rename multiple blocks and other named objects using RENAME command.

Do you have questions related to this tip? Let me know in comments below.